Problem Statement
To identify the estimated potential credit losses, we calculate a loan’s projected profitability. Under IFRS 9, banks are required to recognize credit losses at all times based on reasonable information, considering past, current, and future events. Typically, most, if not all, models for expected credit loss (ECL) are developed using the past information and performance of existing and former clients. Given this assumption, banks need to update their models regularly to be able to accurately capture the more recent and current performance of their portfolio.

A. Loss Given Default (LGD)

Loss Given Default (LGD) is a lender’s (or creditor’s) projected loss if a borrower triggers an event of default. LGD is a measure used by Financial Institutions and other private, non-bank lenders to help calculate the projected loss of a loan (often referred to as a “credit facility,” which may include operating credit, term loans, commercial mortgages, capital leases, etc.). LGD is most commonly expressed as a percentage; however, it can also be expressed as an absolute dollar figure. It is tied very closely to any security underpinning credit exposure. In fact, in its most literal sense, LGD is the inverse of an asset’s recovery rate.

B. Calculations of LGD

PD stands for “Probability of Default.”

LGD stands for “Loss Given Default.”

EAD stands for “Exposure at Default.”

Discounting is for time value of money 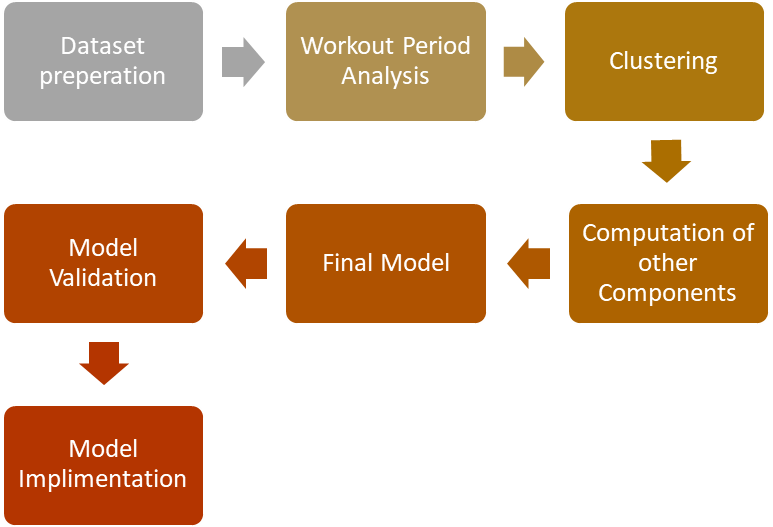 The second step involves performing workout period analysis. Workout period has to be identified based on the time taken to cure most of the loans recoverable. A period of three years is usually good.

In clustering, datasets are divided into different groups based on their similarities. This aids in generalizing certain behaviours across a specific grouping. Mostly, we use the clustering technique for the analysis. i.e., K-Means clustering – one of the simplest unsupervised machine learning algorithms. In a nutshell, K-means clustering identifies k numbers of centroids (means) and allocates every data point to the nearest cluster while minimizing the distances of the data points from the centroids. LGD can be obtained for different clusters/segments of customers.

Finally, the loss given default is obtained by combining: 1. Recovery during workout period 2. Non-Cure probability 3. Discounting the recovery (TVM). LGD can be obtained for various customer segments. Segments can be obtained by data-based clustering or business logic. The LGD thus obtained can be projected into the future using macro-economic adjustments. This will eventually be used in ECL calculations and loss mitigation strategies.